STUMPY is a powerful and scalable Python library for computing a Matrix Profile, which can be used for a variety of time series data mining tasks

STUMPY is a powerful and scalable library that efficiently computes something called the matrix profile, which can be used for a variety of time series data mining tasks such as:

Whether you are an academic, data scientist, software developer, or time series enthusiast, STUMPY is straightforward to install and our goal is to allow you to get to your time series insights faster. See documentation for more information.

How to use STUMPY

Please see our API documentation for a complete list of available functions and see our informative tutorials for more comprehensive example use cases. Below, you will find code snippets that quickly demonstrate how to use STUMPY.

Supported Python and NumPy versions are determined according to the NEP 29 deprecation policy.

Where to get it

PyPI install, presuming you have numpy, scipy, and numba installed:

To install stumpy from source, see the instructions in the documentation.

In order to fully understand and appreciate the underlying algorithms and applications, it is imperative that you read the original publications. For a more detailed example of how to use STUMPY please consult the latest documentation or explore the following tutorials:

We tested the performance of computing the exact matrix profile using the Numba JIT compiled version of the code on randomly generated time series data with various lengths (i.e., np.random.rand(n)) along with different CPU and GPU hardware resources. 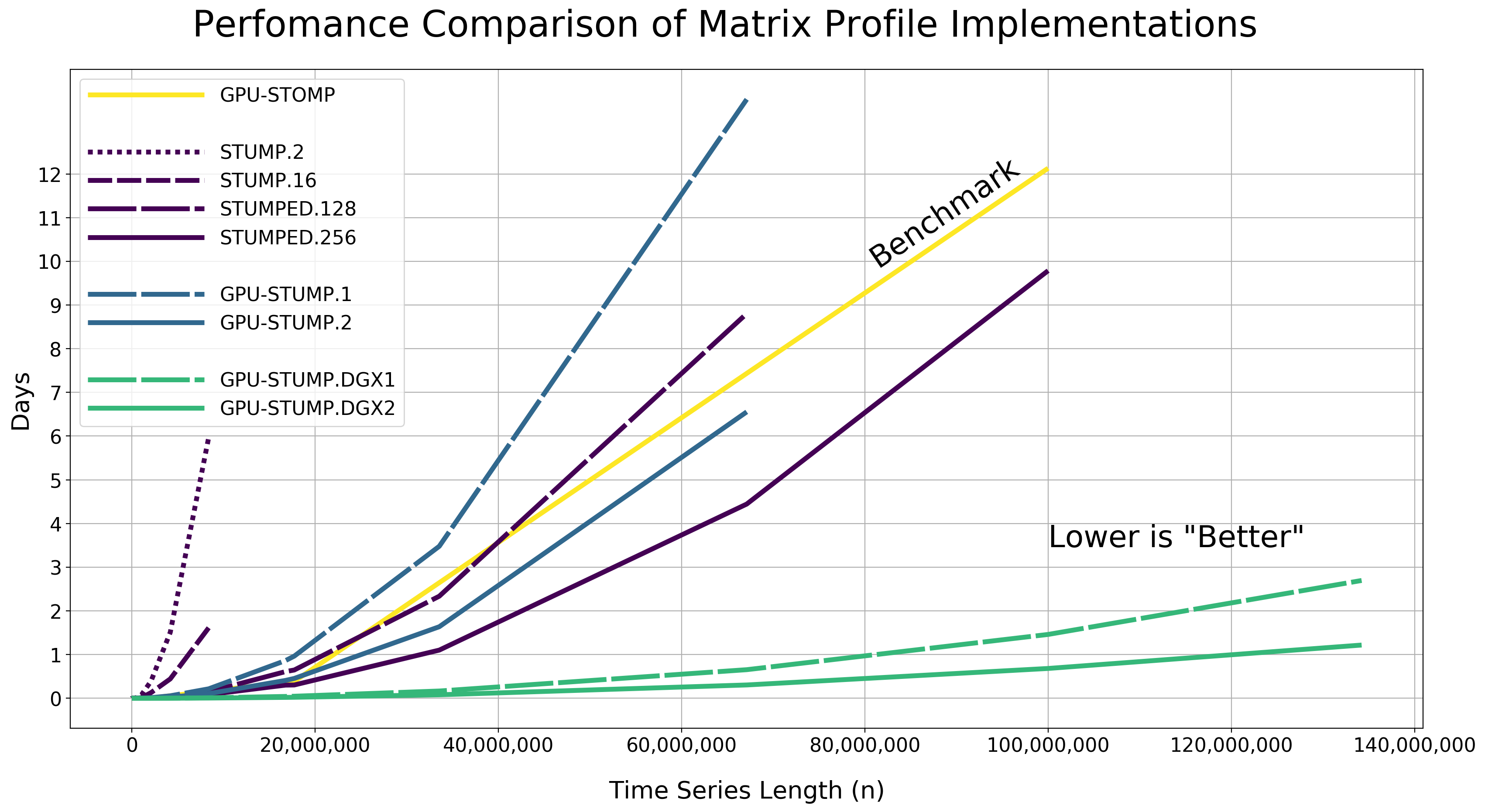 The raw results are displayed in the table below as Hours:Minutes:Seconds.Milliseconds and with a constant window size of m = 50. Note that these reported runtimes include the time that it takes to move the data from the host to all of the GPU device(s). You may need to scroll to the right side of the table in order to see all of the runtimes.

GPU-STOMP: These results are reproduced from the original Matrix Profile II paper - NVIDIA Tesla K80 (contains 2 GPUs) and serves as the performance benchmark to compare against.

Tests are written in the tests directory and processed using PyTest and requires coverage.py for code coverage analysis. Tests can be executed with:

STUMPY supports Python 3.7+ and, due to the use of unicode variable names/identifiers, is not compatible with Python 2.x. Given the small dependencies, STUMPY may work on older versions of Python but this is beyond the scope of our support and we strongly recommend that you upgrade to the most recent version of Python.

First, please check the discussions and issues on Github to see if your question has already been answered there. If no solution is available there feel free to open a new discussion or issue and the authors will attempt to respond in a reasonably timely fashion.

We welcome contributions in any form! Assistance with documentation, particularly expanding tutorials, is always welcome. To contribute please fork the project, make your changes, and submit a pull request. We will do our best to work through any issues with you and get your code merged into the main branch.

If you have used this codebase in a scientific publication and wish to cite it, please use the Journal of Open Source Software article.

STUMPY
Copyright 2019 TD Ameritrade. Released under the terms of the 3-Clause BSD license.
STUMPY is a trademark of TD Ameritrade IP Company, Inc. All rights reserved.

ThunderSVM: A Fast SVM Library on GPUs and CPUs

A python library for easy manipulation and forecasting of time series.

Time Series Made Easy in Python darts is a python library for easy manipulation and forecasting of time series. It contains a variety of models, from

A unified framework for machine learning with time series

An open-source library of algorithms to analyse time series in GPU and CPU.

An open-source library of algorithms to analyse time series in GPU and CPU.

Nixtla Nixtla is an open-source time series forecasting library. We are helping data scientists and developers to have access to open source state-of-

MaD GUI is a basis for graphical annotation and computational analysis of time series data.